After graduation, I headed out to Illinois to spend the holidays with Becca’s family. It was nice to get away for a bit and enjoy spending time with her family and meeting everyone as well. I even rode something other than a bike or snowboard.

We flew back to Colorado on the 28th and left for Jackson on the 29th to ski some powder and meet up with our buddy Aaron.

We skied the first day on the pass and the next day in GTNP. Somehow I managed not to take my camera much, so these pics give a good idea of the conditions.

Becca and I also managed to visit Thai Me Up as well as Snake River Brewing for some post-ski beers. Both are awesome brewpubs with some great beers and food so check them out if you’re ever down there.

Thai Me Up is a really nice Thai Restaurant/Brewpub near the town square. I had their Gnucastle Brown Ale on Nitro with some spicy noodle dish. Over at Snake River, I kicked back a few of their award winning Zonker Stouts which has medaled at both the Great American Beer Festival and the World Beer Cup. Its a really well balanced foreign style stout that I wish I could get here in Colorado.

Aaron arrive back in Jackson after spending some time with his family so we met up with him and Simon, also staying the winter in Jackson.

With feet of new snow sitting on top of a faceted base, stability was a major concern and kept us on low angle slopes. Each step was accompanied by a “Whumph” a tell-tale sign of instability. Entire slopes whumphed keeping us in check and it was even enough to convince Aaron and Simon to go down to Colorado for a trip to Eiseman Hut.

This was my 4th year at Eiseman Hut, located a few miles North of Vail, CO. I had a job interview in the AM, so the plan was to leave immediately after and hike in the dark. However, once we reached the trailhead at 3PM, I got a call from the group that left the trailhead at 9AM….they we’re lost and only 20 min ahead of us. We met up with them and shouldered more weight from the weary group. By 10PM we all reached the hut.

I spent most of my time at the hut reading in front of the woodstove, or sitting out on the deck soaking in the sun (yes, it was that warm). Most of the snow was a few weeks old and was faceted all the way to the ground making for some interesting skiing. Here are a few pics from that trip: 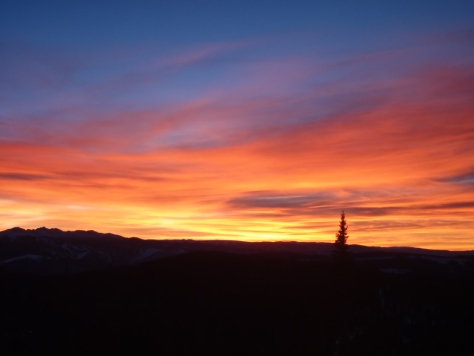 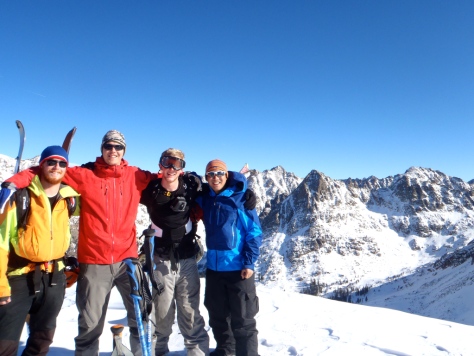 We hiked out on the 6th and drove back to Boulder to unpack and repack for a tip to the San Juans. Long story short, we ended up bailing on our main objective due to conditions. Overall, it was a great week of skiing with everyone and making the most of the conditions given. I’ll be heading back up to JH this weekend so stay tuned for another trip report!