Becca and I loaded up my truck on Friday the 13th and hit the road north to Jackson, WY to visit our buddy Aaron and get on some bigger lines to prepare for a trip later this spring. Big mountains with lots of vert to climb/ride make the Tetons the perfect training ground for bigger trips.

The plan for Saturday was to ski the Middle Teton, but high winds caused us to bail at the base of the Ellingwood. The winds were strong enough to blow us over (really, one of us got blown over) and after that we decided it just wasn’t worth it. We retreated back to town for some beer and food.

On Sunday, Aaron, Becca and I planned to climb/ride the South Teton. However at the last minute, a buddy of mine from Colorado gave us a ring asking if he could join us that day. I told David he better hurry up and meet us at the trailhead since we were already running behind schedule.

At 7:45 am, about an hour later than we originally planned, the four of us left the trailhead and made quick progress to the Meadows of Garnet Canyon. 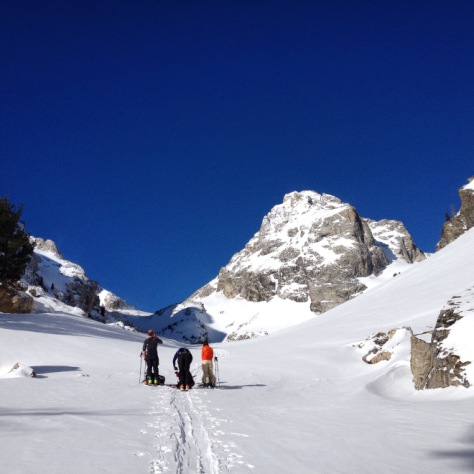 It was much calmer than the previous day, but the real challenge began here. We skinned up icy slopes, eventually throwing our boards on our backs when we came to this talus field. Clouds began to roll in, but we decided to keep going, hoping that the clouds would clear enough for a safe descent.

Once we hit the top of the ridge, we saw mostly blue skies over Idaho.

We threw our lids on and climbed the final couloir to the summit.

Summit shot with the crew!

With mostly clear skies, we were good to descend. We down-climbed a bit to the top of the SE face, where we found interesting conditions. Strong winds had hammered the upper pitches, leaving us with steep, bulletproof snow.

As the slope mellowed, snow conditions began to improve.

As we turned the corner, snow conditions improved tremendously! We went from bulletproof snow to blower powder in just a few turns. 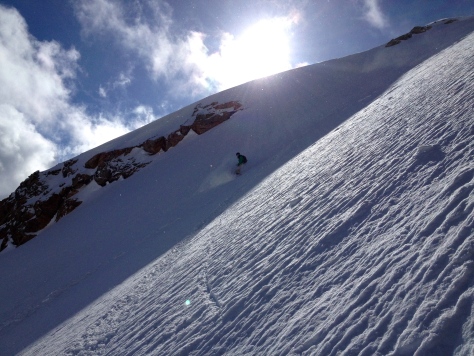 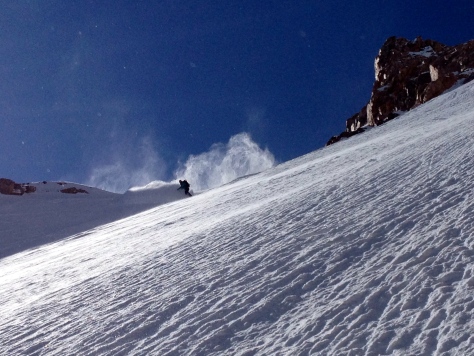 This shot of powder was short lived as the line changed aspect, and it went to bulletproof snow again. The final hundred feet or so were pretty interesting as we had to make our way down a 160-200 cm wide chute, with ice beneath it. This chute was barely wide enough to sideslip down, let alone make any turns in it.

Once we were down, clouds had fully shrouded the mountain. We had timed it just right. We took a quick break at the lake before riding out of Avalanche Canyon and back out to the car for some celebratory beers.